You are here: Home / Best Seller / Heart of Eden

I like Caroline Fyffe’s books….i do sometimes have trouble with some of the women characters….in this book, Katie, the youngest girl goes out where she’s been told not to go and not to be out without someone with her…..she ends up being kidnapped and when she is recovered…..it is never mentioned that if she had behaved as she was supposed to, none of that would have happened….eventually, she turns into a good character even after a poor start. – Amazon Review 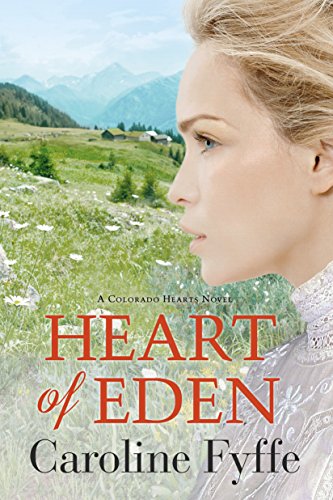 Raised by guardians in Philadelphia, the Brinkman sisters have suddenly been bequeathed more than the truth about their late, estranged father—they’ve also inherited the Five Sisters Ranch, the dynasty he’d built for them in Eden, Colorado. It’s theirs on one condition: to claim it, they must live on it for six months—a wilderness worlds away from the comforts of the city. For Belle Brinkman, her father’s last wish could fulfill a dream she never knew she had.

Though Blake Harding, their father’s protective friend and faithful foreman, has yet to come to terms with his own broken past, he finds his heart opening to the inspiring and determined Belle. But Eden soon proves to be a tough paradise for all of them when the sisters’ lives are threatened by someone hell-bent on driving them out of town. Now they must gather their courage if they’re going to secure their legacy and have a chance at claiming the new life and possibilities of love that the untamed territory offers.

Caroline Fyffe was born in Waco, Texas, the first of many towns she would call home during her father’s career with the US Air Force. A horse aficionado from an early age, she earned a Bachelor of Arts in communications from California State University-Chico before launching what would become a twenty-year career as an equine photographer. She began writing fiction to pass the time during long days in the show arena, channeling her love of horses and the Old West into a series of Western historicals. Her debut novel, Where the Wind Blows, won the Romance Writers of America’s prestigious Golden Heart Award as well as the Wisconsin RWA’s Write Touch Readers’ Award. She and her husband have two grown sons and live in the Pacific Northwest.